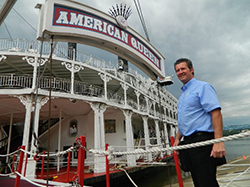 The largest steamboat ever built, the grand American Queen is a gracious and elegant triumph of American ingenuity.  Although filled with today’s modern amenities, her rooms and accommodations display all the opulence of the American Victorian era. Glistening woodwork, fresh flowers and antiques adorn her interior spaces. Outside, lacy filigree evokes memories of the many stately riverboats that preceded her and so inspired her designers.  Inside, her business office sports a RISO 7050 ComColor that was in need of service. So they called DSC Office Systems, an authorized RISO service center and dealer.   They print itineraries, booklets, menus and more on demand in full color at 120 pages per minute.

While docked at the Port of Cincinnati, Rick Bailey, DSC Service Manager boarded the American Queen to return their RISO to top performance. 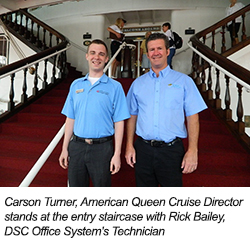 Upon arrival, Rick was welcomed by Carson Turner, the Cruise Director of the American Queen who escorted him to the business office.   Whether your copier is in the corner of your office, in a conference room or floating down the Ohio River, we are happy to keep it in top notch condition.

After all, even the American Queen knows that “we aren’t the biggest, just the best at serving our customers.”

More About The American Queen 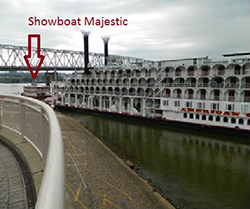 Worth noting is the security needed to board the American Queen.  Similar to TSA at the airport, a driver’s license is needed and your bags may be inspected.

More information and travel packages are available at AmericanQueenSteamBoatCompany.com.

Personal Side of Community: More Than a Business
By Bernie Reagan

Houston…We Have A Problem
By Bernie Reagan

First a New Name…Now A NEW LOCATION!
By Bernie Reagan

A “Moving” Lesson
By Bernie Reagan

See Bernie’s New Truck & How He Got a 100% Write Off.
By Bernie Reagan

Smoke & Mirrors: Why the Lowest Cost Per Copy Can Be the Highest Price
By Bernie Reagan