Our blog, Copier Truths, Myths and Outright Lies is filled with experiences that customers have shared when dealing with their previous vendor.  Those experiences cover the range of confusing contracts, unreasonable demands and a general lack of trust and yet, they told us that they had signed the contract.  Imagine my surprise when I found myself in the midst of the same experience. 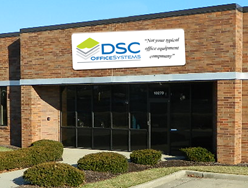 I had been searching for a new building for about a year.  Three months ago, I found one that I thought would work in an awesome way.  I was very excited.  The real estate agent representing the property was very nice (think copier sales man).  However, the lease was very detailed and confusing.  The owners were located in California.  When I asked for small changes and accommodations, the agent needed to go back to the owners (think sales manager) to get a response.  And the response was definitely underwhelming.  Basically, they didn’t want to make any changes and took the position that if it doesn’t work out, then you can always sue us.  Even with that kind of response, my emotions were so tied to that building, I was still going to sign the lease.

Then Ben from SCHOOLSin school furniture called me (think of one of your good friends) and asked if I was still looking. Ben is a client and has been a great advisor for DSC. I said that I was ready to sign a 5 year lease. Ben said, "Before you sign, you really need to look at this space and meet the owner" (think DSC).

The next day, I toured the facility.  It was great.  I spoke directly to the owner Dan Wheeler of The Target Group.  The contract was simple.  I needed some changes and accommodations.  No problem.  I felt good about signing a 5 year lease because I understood it and it really was what I wanted.

I suddenly realized what it was like to be a DSC customer where the vendor is working with you to create a mutually successful relationship.

The owner of our new building may not be the biggest, but as far as I am concerned, he is the best at serving his customers.

Personal Side of Community: More Than a Business
By Bernie Reagan

Houston…We Have A Problem
By Bernie Reagan

First a New Name…Now A NEW LOCATION!
By Bernie Reagan

A “Moving” Lesson
By Bernie Reagan

See Bernie’s New Truck & How He Got a 100% Write Off.
By Bernie Reagan

Smoke & Mirrors: Why the Lowest Cost Per Copy Can Be the Highest Price
By Bernie Reagan