Tom Leibel is the Managing Director at the Holy Spirit Center.  Recently, we had mailed him a refund check of $550 because his usage had dropped so much.  Patty, our DSC Office System’s Administrator, had re-worked his contract to put his projection more in line with what he was actually using. It saved him close to 20%.  Tom called me (Bernie Reagan, the owner of DSC Office Systems) to thank me for Patty’s re-work of his contract.  I said, “I never asked Patty to do that.  She did it on her own.  That is our culture here at DSC Office Systems.  We train our employees to take the initiative and think of our customers first.”

Patty regularly reviews all the contracts for accuracy of copies.  Tom’s organization may have been over on color copies but under on black and white.  She then subtracts the dollar amount of copies they are under from the overage.

To my knowledge, DSC Office Systems is the only company in Greater Cincinnati and possibly in the USA that offers this level of service to their customers.

Our leasing company said that they had not heard of any of the hundreds of companies they deal with doing anything like that. Our leasing representative said that she had only heard of reducing the copies for the next year, but never returning a check or watching out for the customer the way we do.  That’s just one of the reasons why DSC is different. 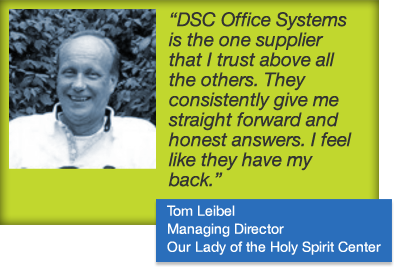